Standing in the Light: The Captive Diary of Catharine Carey Logan, by Mary Pope Osborne, was published in 1998 by Scholastic. 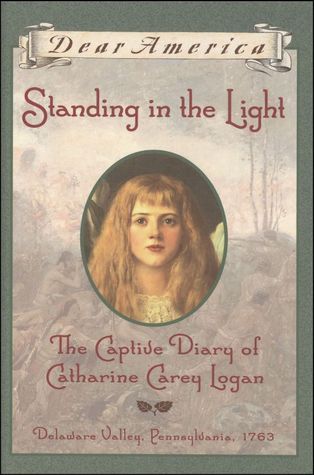 Catharine Carey Logan and her family have enjoyed a peaceful and prosperous life as the Quakers and Delaware Indians share a mutually trusting relationship. Recently, however, this friendship has been threatened by violence against the Indians. Then, Catharine and her brother are taken captive by the Lenape in retaliation. At first, Catharine is afraid of her captors. But when a handsome brave begins to teach her about the ways of the Lenape, she comes to see that all people share the same joys, hopes, and fears.

I feel as if Standing in the Light was written for the sole purpose of portraying Native Americans in a different light than early American narratives, specifically “captive narratives” such as the one written by Mary Rowlandson. Or perhaps Osborne’s hope was to portray a captive narrative in a way that would respect both the thoughts and feelings of a captive English person and the thoughts and feelings of the Native Americans.

My one complaint about Standing in the Light is that it’s rather boring. Its informational value is good, but the plot itself is predictable, even cliché. Catharine is a boring, cardboard character, solely there to be the voice of Osborne. It’s not a particularly memorable book, especially since it doesn’t cover a significant period of American history—it doesn’t take place during the French and Indian War or anything. It’s just a little “slice of life,” the story of a Quaker girl who gets captured by Native Americans. Perhaps interesting to some, but not particularly to me.

Standing in the Light does a good job of portraying both sides of the Native American-British conflict that was ongoing through the 1700s. I just wish the plot was less predictable and Catherine was a more memorable protagonist. Dear America has always been a series that stands out in its portrayals of historical events, but Standing in the Light is definitely one of its weak links.

The Reverend wants Papa and other Quaker Friends to ride to Lancaster tomorrow and help protect the frightened Indians on their sad march to Philadelphia.

We passed the Sabbath in much silence and prayer. When Papa began to read, “The Lord preserveth all them that love Him,” he stopped and could not read further. I think his heart especially aches for the little Indian children.

You can buy this book here:

2 thoughts on “Standing in the Light by Mary Pope Osborne”