[My blog schedule is wacky at the moment and I apologize. I also realize that I completely forgot to upload Sunday’s Redwall review.]

Archer’s Goon is written by Diana Wynne Jones. It was first published in 1984 by Methuen Children’s Books. Jones’ website can be found here.

“When Howard Sykes comes home and finds the Goon taking up all the available space in the kitchen, life turns upside down. The Goon refuses to leave without “Archer’s two thousand” owed, he says, by Howard’s father.

But Mr. Sykes doesn’t owe anything as simple as money. As Howard desperately tries to unravel the mystery of the disappearing words, he uncovers all sorts of incredible things about Archer, his crazy family, and who is really running the town where he lives.”

This is one of the last Jones books that I ever read, and yet it impressed me as much as any of her others. While perhaps not on the same level as Howl’s Moving Castle or Fire and Hemlock or a few other of her novels, it’s still quintessentially DWJ, which means it’s pretty much golden as far as I’m concerned. There are only a couple of DWJ books that I don’t really like, and this is not one of them.

The two reveals about Erskine and Venturus were completely unexpected and surprising, and, as I’ve said before, almost nothing really surprises me anymore in literature, so when it does happen, it makes me love the book that much more. DWJ is so great at including twists in her plot: just the right amount of foreshadowing to have it not come completely out of left field, but not enough to make it obvious.

One of the things I love about DWJ is that she never talks down to her readers. She never waters down the plot because of her audience. It makes adults like me able to read and enjoy and appreciate her books just as much as children; they do not have quite as much of a “children’s book” feel to them even though they’re marketed to children. It’s quite wonderful (there’s nothing wrong with children’s books; I happen to love lots of them. They just read like children’s books). 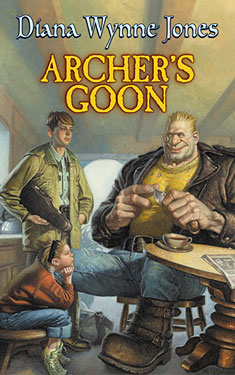 Nothing, really. Awful is a little annoying, but then, she’s awful.

I also admit that perhaps I didn’t find really anything wrong because I have a very strong bias for DWJ books (although that didn’t help out Aunt Maria).

I love that there is fan art for this book!

“Who is Archer?” said Howard.

The Goon shrugged his huge shoulders. “Archer farms this part of town. Your dad pays, Archer doesn’t make trouble.” He grinned, almost sweetly, and sucked the last bit of bread off the point of his knife. “Got trouble now. Got me.”

The Goon’s smile broadened. He took his knife by its point and wagged it at Awful. “Better not,” he said. “Really bett’n’t had.” They exchanged looks again. It seemed to all of them, even Awful, that the Goon’s advice was good. The Goon nodded when he saw them look and held his mug out for more tea. “Quite peaceful really,” he remarked placidly. “Like this house. Civilised.”

“Are they really from Shine?” asked Awful.

The Goon seemed to find that hard to do, too. “Bit like Archer,” he said at last. “Brains and all.”

Diana Wynne Jones is just too good at writing books with great plot, decent character development, and unique worlds and magic. Archer’s Goon is no exception, and it has two wonderful twists that completely surprised me. I love DWJ; that is all.

You can buy this book here: Archer’s Goon